Local Lights is a series of reflections by Bethlehem Historical Association members and friends.

The Stained Glass Windows of First Reformed Church of Bethlehem 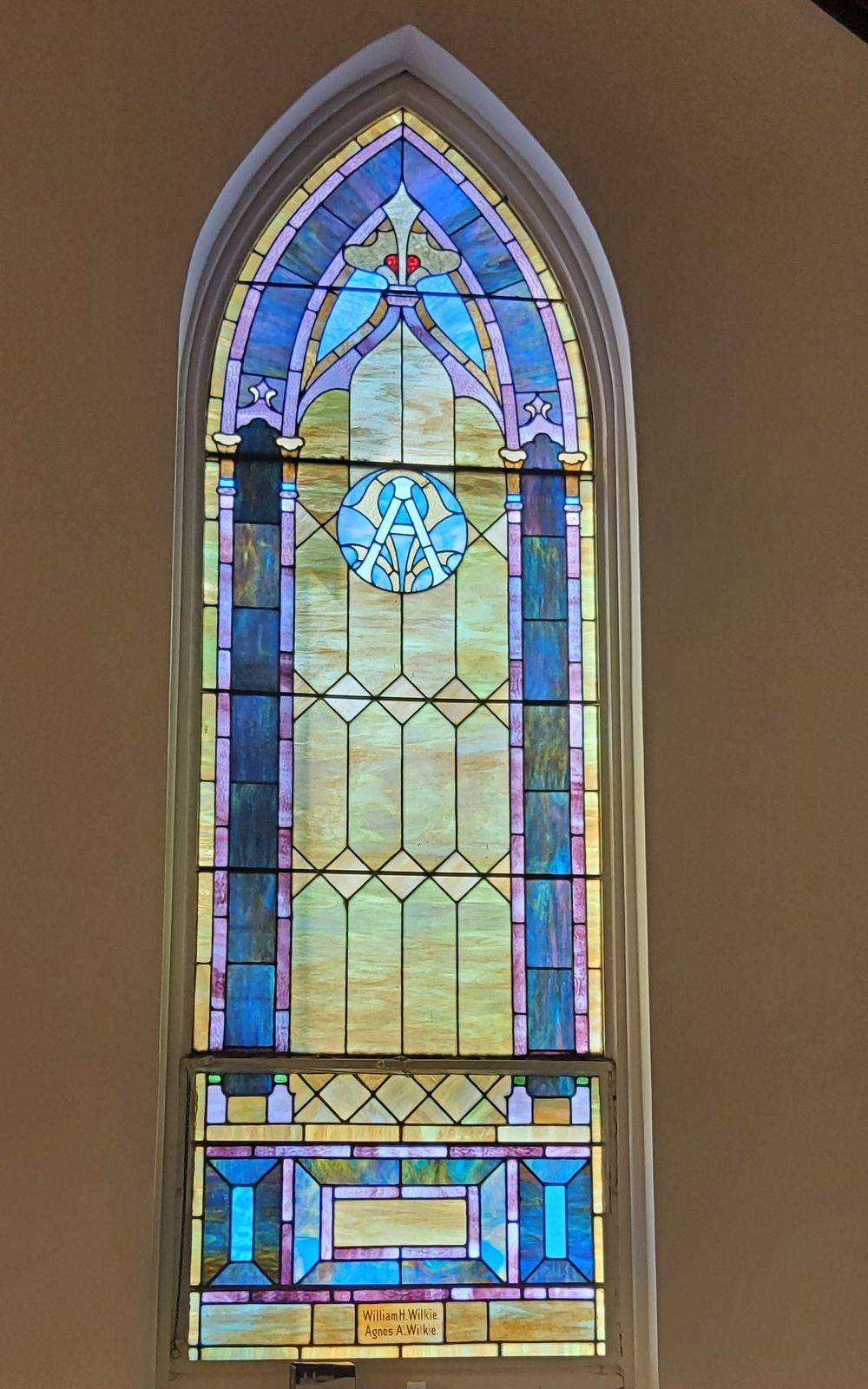 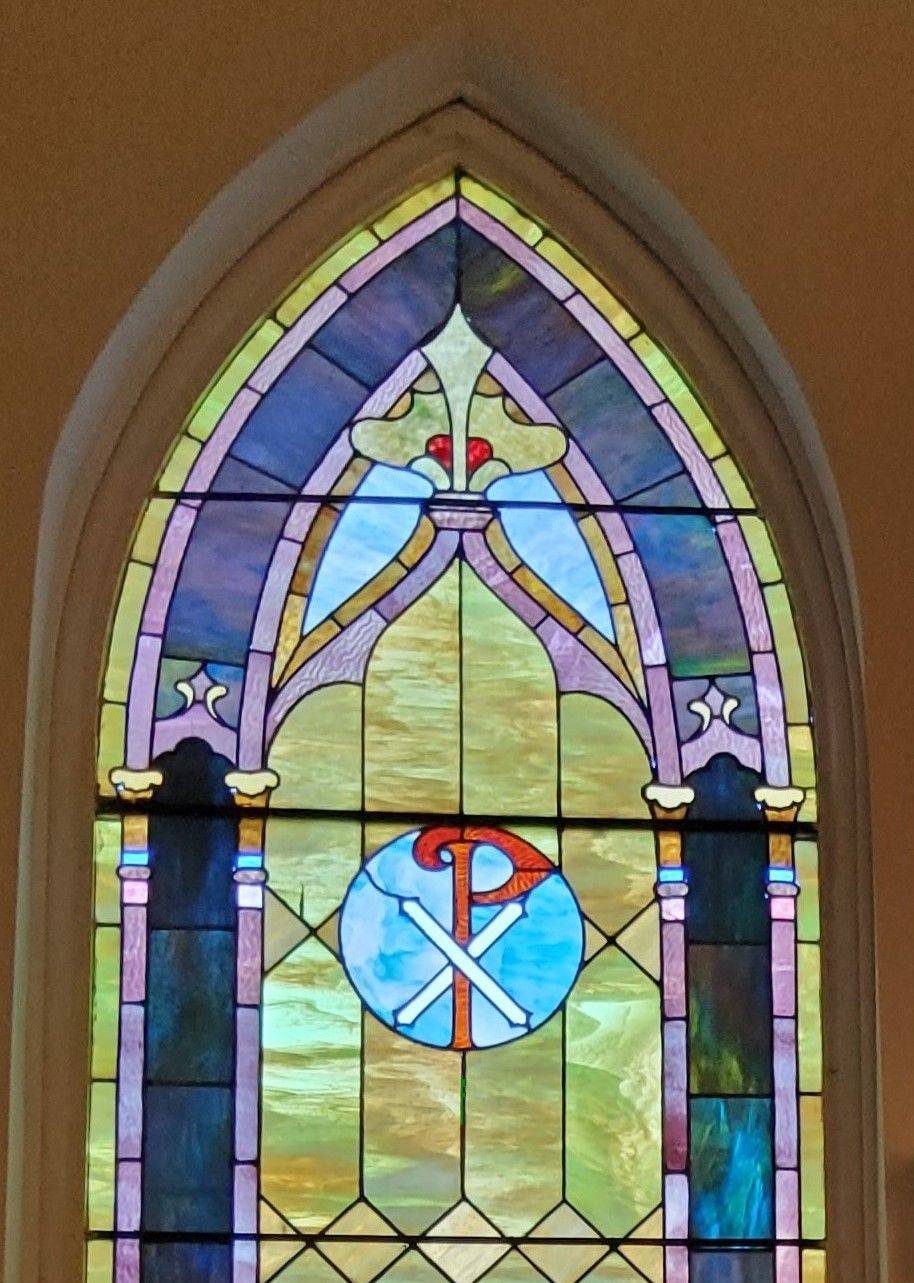 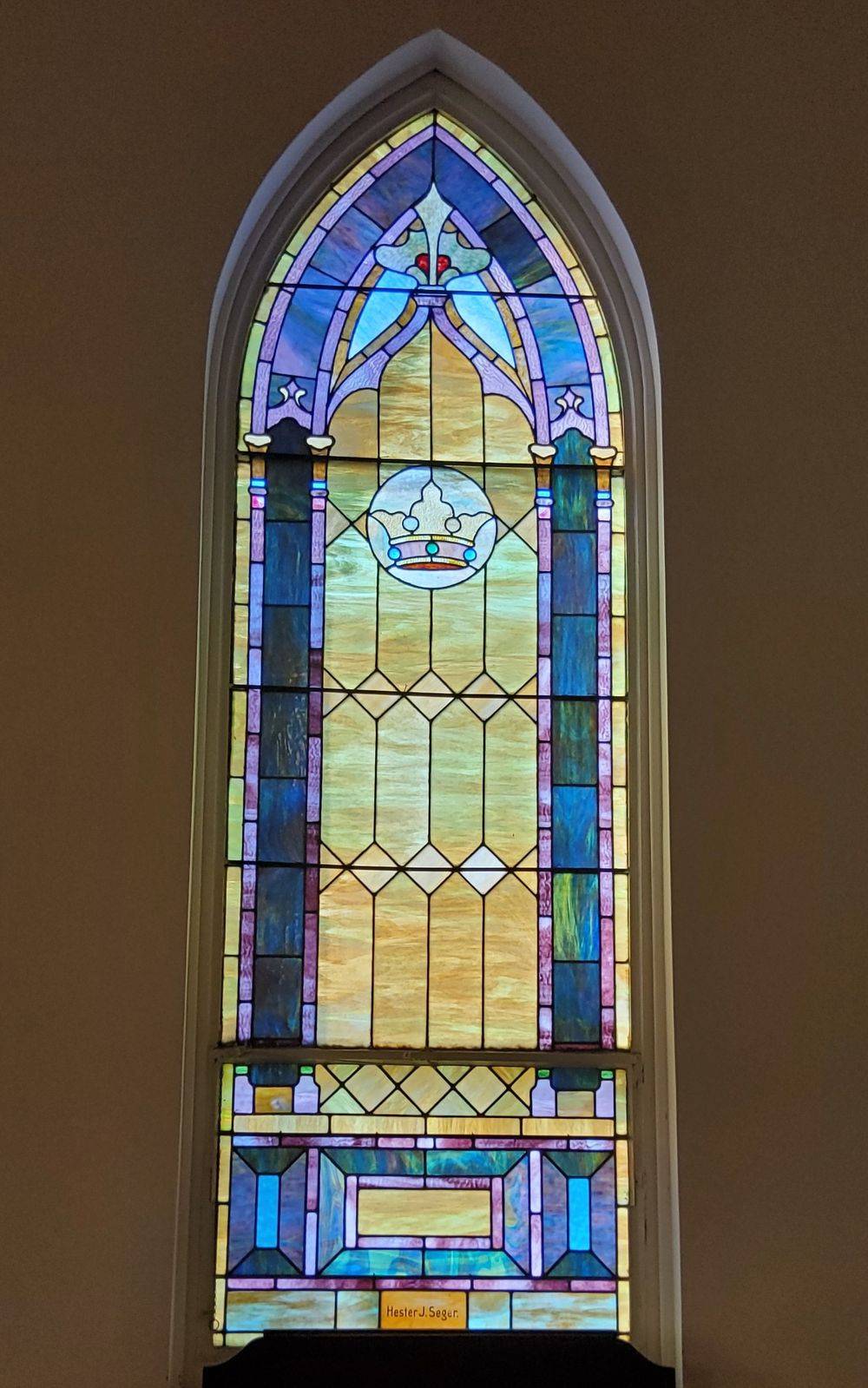 The church was organized in 1763 on what is today the corner of Route 9W and Church Road in Selkirk. Unfortunately, the records from 1763-1791 were lost. Current records are from 1792 until present. The second church erected on site was built in 1821 and destroyed by fire March 9, 1890. The church was rebuilt that same year and has had several additions over the years.

In the large chapel there are 12 large stained-glass windows that were given in memory of members of the church. Each window has the name of a member in the stained glass at the bottom. The following is a list of those names:

Judy Selkirk, an artist and member of the church, painted copies of the medallions from the windows and attached them to the front panels near the floor of the dais at the front of the room. During church the children are asked to find the medallion that matches a window. 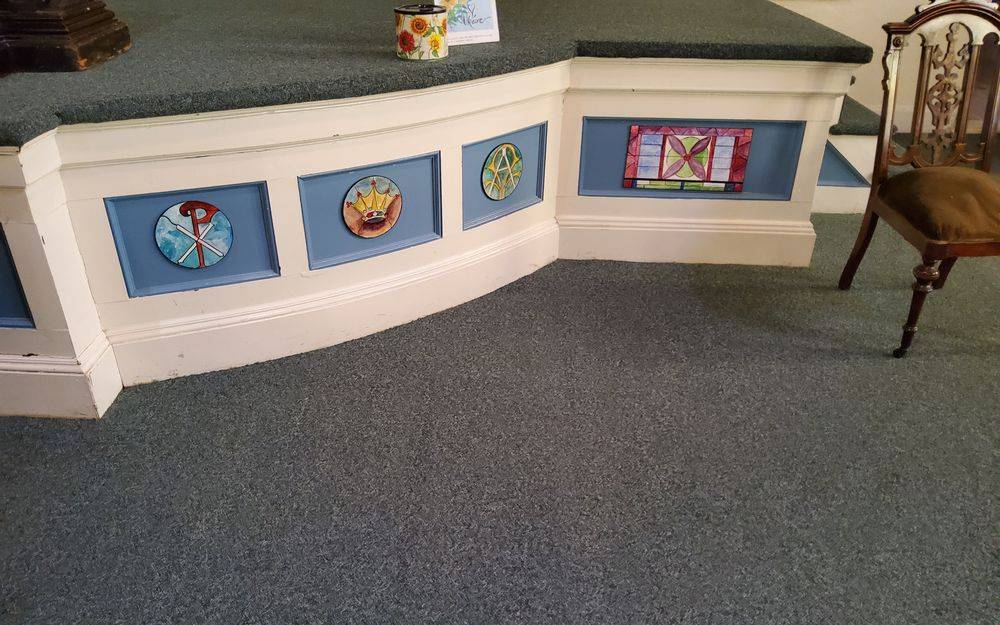 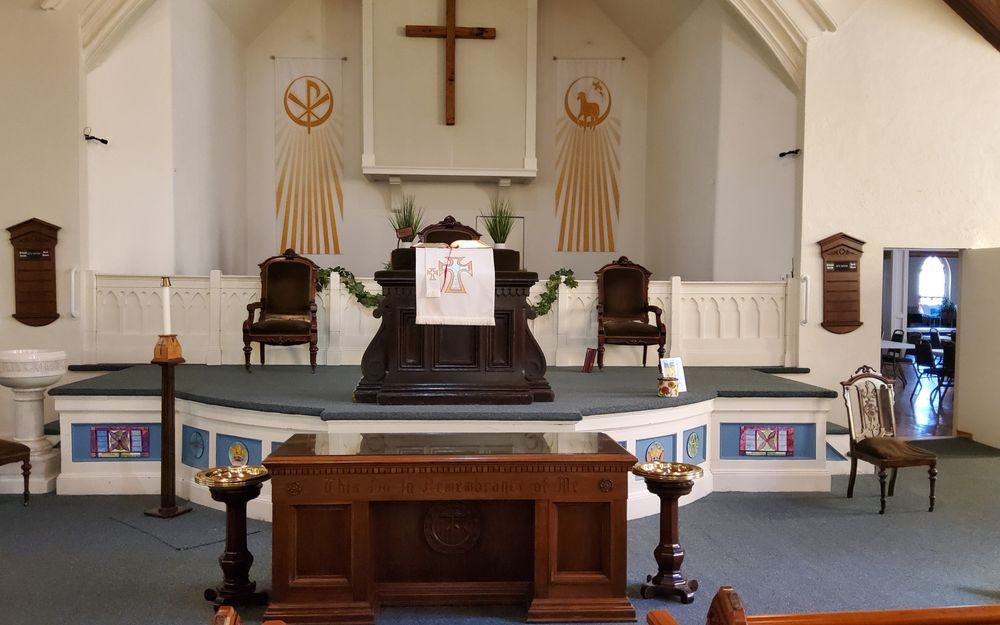 The windows that were originally in the rebuilt 1890 church were saved and moved to the outside wall during renovations.

The church has been in continuous use since it was originally built to the present day.

This month, BHA member Linda Schacht reflects on the schools she attended.

I attended school in the Ravena Coeymans Selkirk School district starting in 1953. I attended six different schools over the following years. The schools I attended by grade were as follows: Kindergarten-South Bethlehem School, 1st and 2nd grade at Selkirk School, 3rd and 4th grade at Cedar Hill School, 5th and 6th grade at Weisheit School, 7th and 8th grade at Jericho School, and 9th grade and on at the new senior high school in Ravena.

Most of these schools are well known with the exception of the Weisheit School which seems to be forgotten except by those who attended school there. You would think being named the Weisheit School it would be on Weisheit Road. However, that is not the case. The school actually was located on the triangle between Rt 9W and Church Road in Selkirk. It was an unassuming white frame building that looked like any normal apartment building.

The building was built in 1941 with two show rooms downstairs and three apartments upstairs. Records show it was owned by David H Weisheit in 1944 where he operated an International Harvester show room from 1948 thru 1949. It appears the show rooms were vacant after that.

In 1955 there was a redistricting of the schools and, with a growing population, more room was needed to accommodate all the students. The two vacant show rooms at the Weisheit building were available so the district leased them for the 5th and 6th grade students. Thus, the Weisheit School was formed. We students had to learn how to spell the schools name so we were taught to spell it as We-is-he-it. To this day that is how I remember to spell it!

The school was used until the new AW Becker School was built in 1962-1963. Perhaps, as it was only open for eight years, that is the reason not many people remember it existed. In 1987 David Weisheit’s widow sold the building to Charles Emery and his wife who lived there until 1996 when she sold it to Wayne Seabridge and his wife who still live there and run it as an apartment building.

Bread and Benefits -- Items in the BHA Collection

PUT IN ALL LIQUIDS FIRST THEN FLOUR

TURN UNTIL DOUGH FORMS A BALL

TAKE OFF CROSS PIECE LEFT OUT DOUGH WITH HANDLE

This pail is a manually operated tabletop dough mixer, kneader and raiser. It does everything your modern bread maker does except bake!

It is a recent donation from a former Bethlehem resident. The donor described how his mother would make bread with it once or twice a week. He would get to operate the crank. The smell of fresh baked bread is a pleasant memory for him. He and his wife tried making bread in it and they had plenty since it makes enough for 4-6 loaves at a time.

Fraternal benefit organizations were quite prevalent in the late 19th century. Many insurance companies were not interest in sales to ordinary people, and there was little in the way of safety nets. Groups like the Maccabees provided a margin of protection against catastrophic events along with opportunities for pleasant social meetings and other gatherings.

Originally it operated on an assessment basis: whenever a member died, each living member was assessed 10 cents to go into a pot to provide the widow with $1000. After reorganization in 1881, it became much more sophisticated, collecting monthly assessments based on payouts. By the 1890s it provided not only death benefits but also sick benefits, disability benefits and funeral benefits. 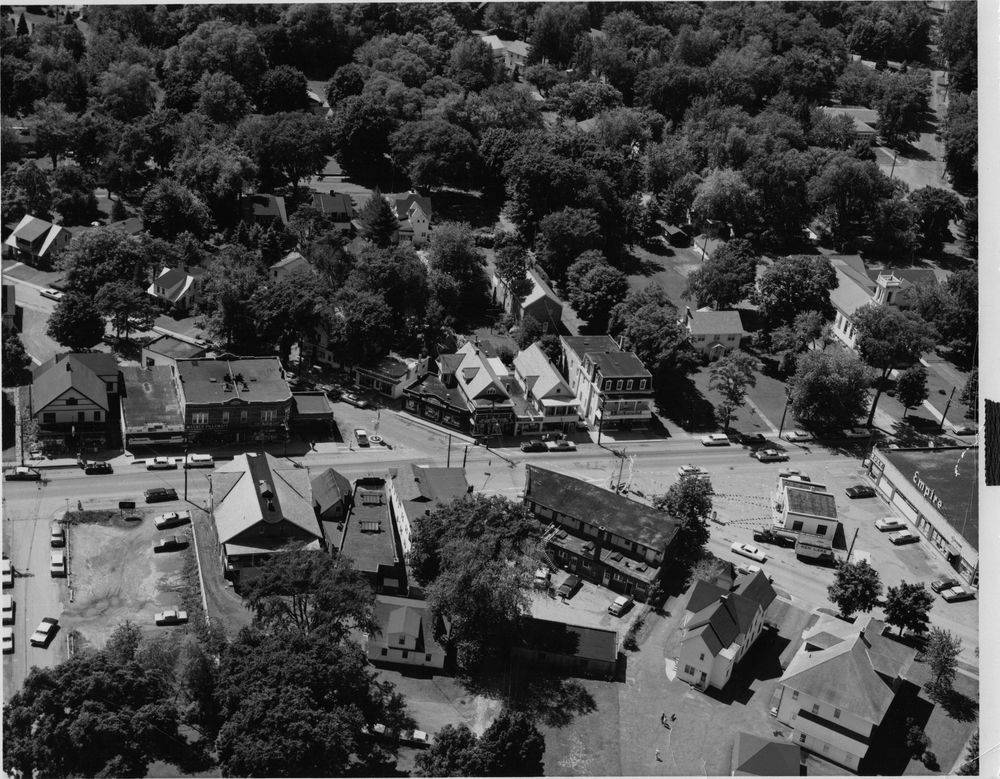 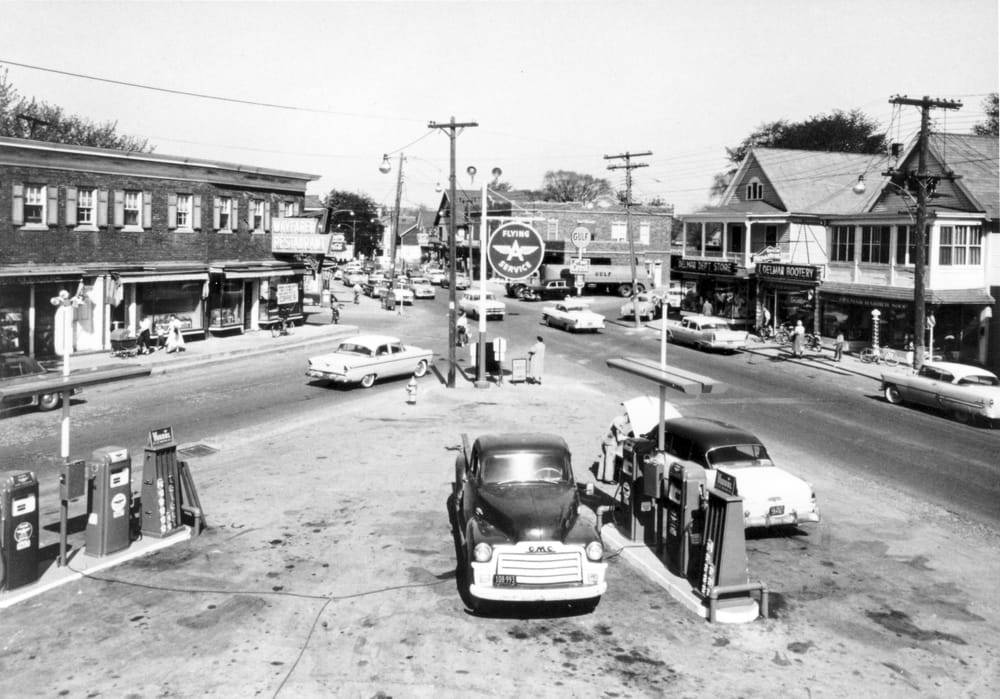 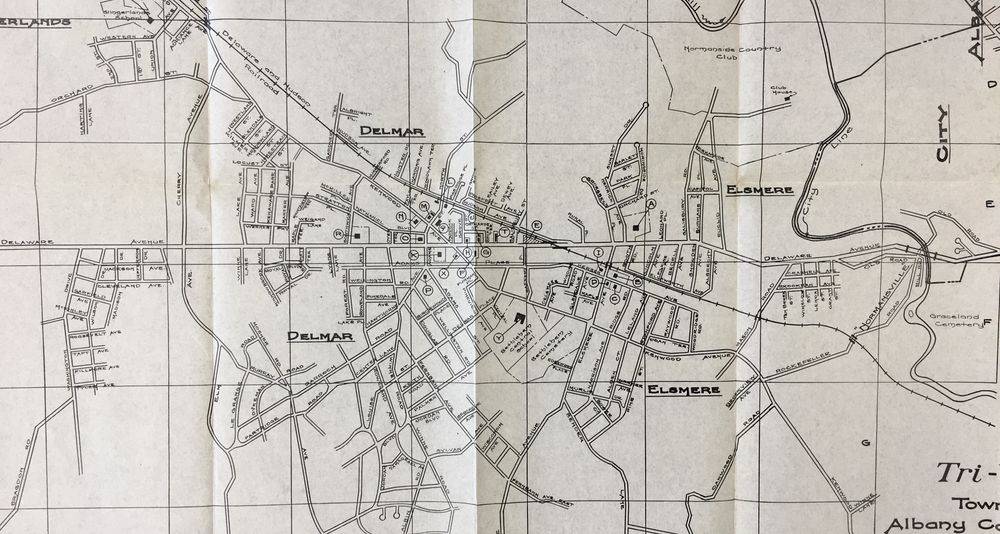 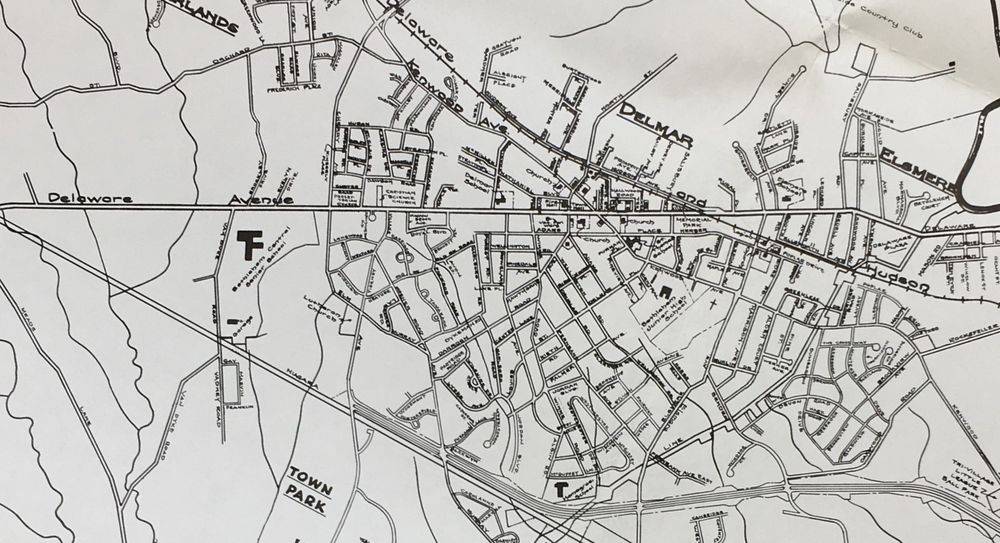 TOP: Two views of the Delmar Four Corners about 1957.

This month’s article is presented by Vicki Folger, BHA member and Trustee.

I'm always wondering about roads, where they come from, where do they go, and the origin of their names. As I wander through the Town of Bethlehem, I remember some of the roads which have been straightened since my childhood. Route 9-W and Elm Ave. have had many changes over the last seventy years.

Many of the roads still remains and some have completely disappeared. Some roads were cut in half by new highways. For me it is fun to figure out where a road came out and then continued.

I was curious about Delaware Ave. which I've learned was an old Indian Trail. In 1805 New York State chartered the Albany and Delaware Turnpike Company to build a road connecting Albany to Otego which at that time was in Delaware County. Thus it was called Delaware Turnpike.

New Scotland Rd. is more obvious as it leads to the Town of New Scotland out of Albany. New York State chartered the Albany, Rensselaerville and Schoharie Plank Rd. which erected a toll gate in 1861 near the site of the famous Toll Gate Ice Cream store in Slingerlands.

Elsmere Ave. is clearly named for the hamlet as it extends south from Delaware Ave. The Delaware and Hudson Railroad had a station there and named it Elsmere for a popular novel of 1888 called “Robert Elsmere”.

Many of the smaller roads are named for the farms of that community. Clapper Rd. is in front of the Bethlehem Historical Association’s Museum, the Cedar Hill School. There is an exhibit there about Anna Clapper who lived on that farm. Lasher Rd., LaGrange Rd., McCormack Rd., Murray Ave. are also examples of farm roads. Creble Rd. is named for the Creble's who lived in the oldest house of the town and descended from the Winne family. There is Winne Rd. in Delmar as well.

Many roads are named for natural sources such as trees or for their destinations. Maple Ave. in Selkirk, Cedar Hill, Elm Ave, Font Grove. Kenwood Ave. lead to a small hamlet called Kenwood which now is mainly the port of Albany. Some follow the creeks, Onesquethaw Rd., Krumkill Rd.

This is just a short observation. There is so much more.

What if Anna Clapper Had Gone to Wyoming? 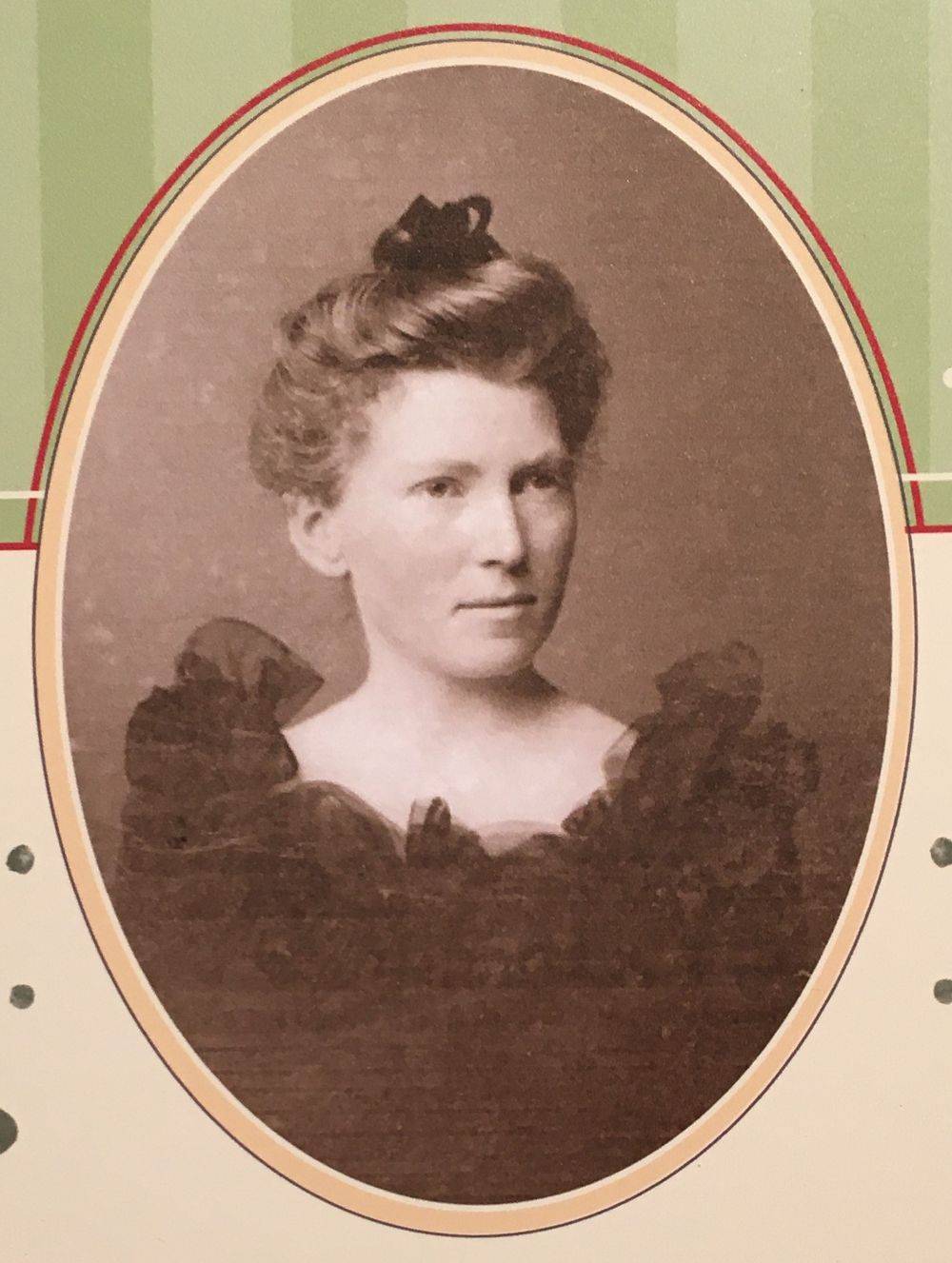 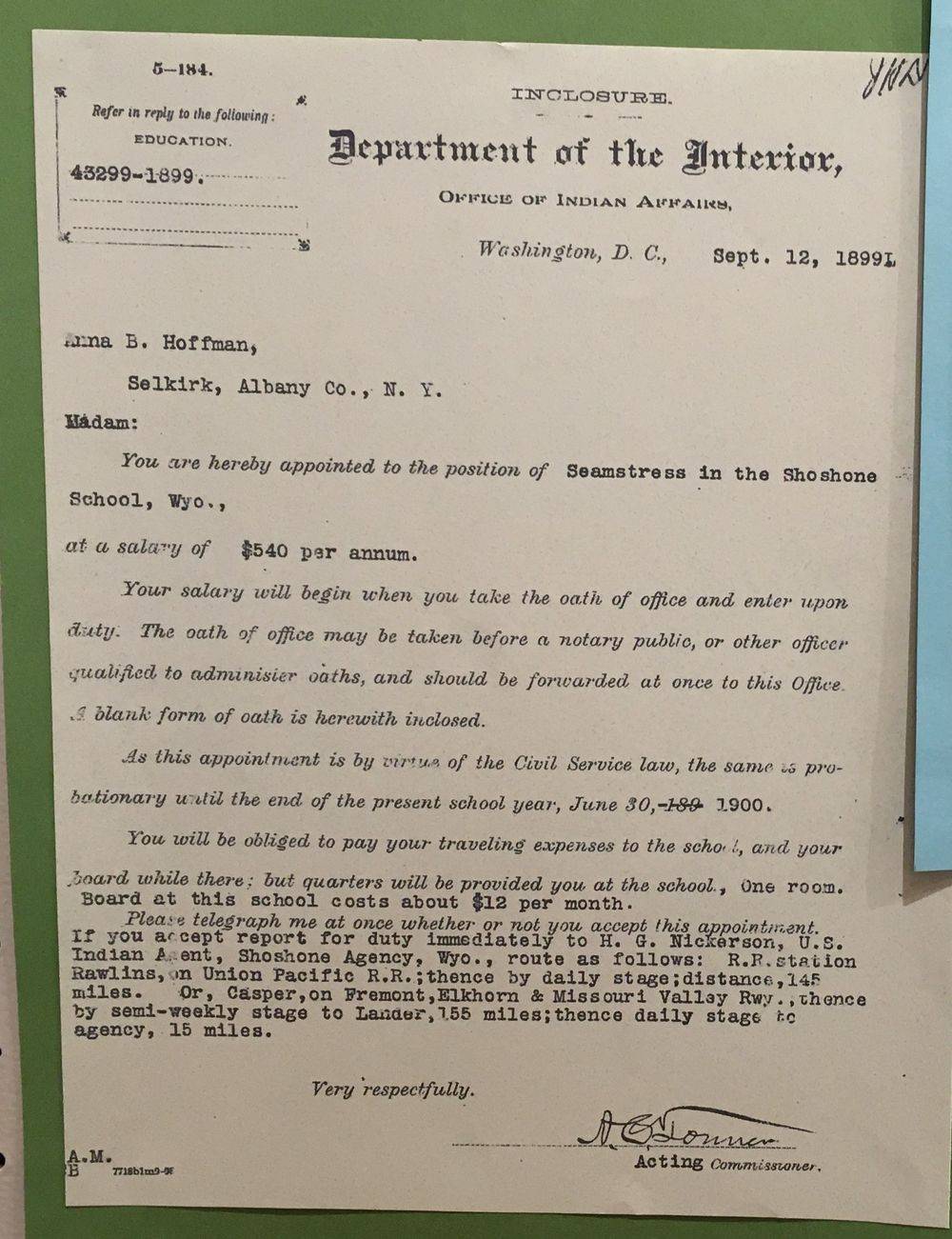 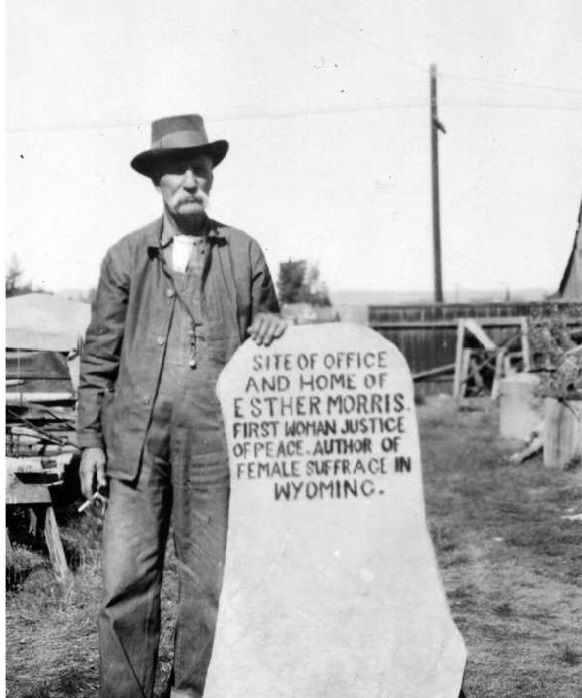 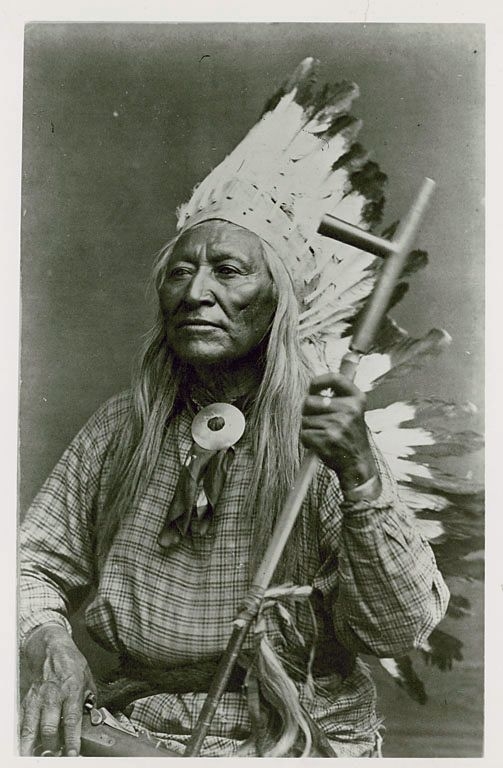 This month’s is presented by Susan Leath, BHA member since 1995(!) and also Town Historian.

While taking in the newest exhibit at the museum, the one about Anna Hoffman Clapper, a small item caught my eye. It is a letter dated September 12, 1899 appointing Anna to the position of Seamstress in the Shoshone School, Wyoming. How independent she was to seriously contemplate a move to Wyoming!

At that time, Anna was about 26 years old. She was an accomplished seamstress, trained in the T. Taylor System and already running a successful dressmaking business sewing for well to do women in Selkirk. Interestingly, she would go to live with the family charging a dollar a day plus room and board.

If Anna had accepted this position, she would have traveled a long way by rail, leaving Albany for Chicago where she would have caught a Union Pacific train to go further west. As the letter directs, she could ride the Union Pacific to Rawlins, Wyoming and then take a 145-mile stagecoach ride to the school (believed to be in the area of Fort Washakie) or opt to take the train to Casper and then take a stage to Lander (155 miles) and another stage to the agency (only 15 miles). Phew – I get tired just thinking about that journey!

When she arrived, Anna would have met H. G. Nickerson, the U.S. Indian Agent. Herman Gould Nickerson was born and raised in Ohio, served with the 186th Ohio Infantry during the Civil War and achieved the rank of Captain. After the war, he headed out to try mining for gold in the western territories. He ended up in South Pass, Wyoming where he established a mining interest, as well as farming and ranching, near Lander. He served in many public capacities included school commissioner, county justice of the peace, and was appointed Indian Agent in 1893. He and Harriet Kelsey married in 1874. She was a school teacher for several years in South Pass as well as “taking an active interest in the welfare of the young commonwealth of Wyoming” (as one death notice states.)

What would Anna Hoffman Clapper, a sharp and independent woman, have made of the people and places of the American West at the turn of the 20th Century? We will never know because she turned down this opportunity and stayed in Bethlehem. But I find it fun to speculate!

Here are some links to read more about the people mentioned here.

Here’s a link to one of H.G.’s Indian Agent reports: http://images.library.wisc.edu/History/EFacs/CommRep/AnnRep02p1/reference/history.annrep02p1.i0026.pdf

And because the internet is a wonderful thing (sometimes!) here is a link to “Esther Hobart Morris, Justice of the Peace and Icon of Women’s Rights” that includes this cool picture of H.G. Nickerson installing a monument to Morris in 1920. Morris was appointed justice of the peace in South Pass City in 1870 when it was a rowdy mining town.